Students need to realize the impact a sweet line break can have in order to truly appreciate the structure of a poem. They need to learn the difference between end-stopped and enjambed lines, and the potentialities of poetic line structure. Parts of this lesson are inspired by poet and educator Nicole F. Tong, who graciously sent me some of her materials, to which I added some of my own, and viola – a scaffolded lesson on poetic line structure.

First we started with reading the fist half of Rebecca Hazelton’s essay “Learning the Poetic Line” (up to where she shifts into sound). Hazelton’s essay does a fantastic job of explaining the various effects specific enjambments have, and then how those effects change if the lines breaks were placed differently.

Next, I pass out a handout with Gwedolyn Brooks’s poem “We Real Cool” written in paragraph form without the line breaks. Just a continuous line across the page, punctuation included. With a partner, students rewrite it as a poem and how they think Brooks wrote it. They discuss where she would break lines; most go for after the periods.

After a few minutes of discussion, as students are in the throes of end-stopped lines, I play the audio of Brooks reading her poem. (I love how this recording also explains her inspiration for writing the poem.) Once students hear her read, there’s a lot of “Ooooohhhs” and side-cocked heads starting to reconsider their previous choices. As students reevaluate, they discuss how the meaning changes when lines break after “We.” Now, the focus gets placed on “We,” which garners a sense of community and identity. We chat about this for a bit, then I show them the actual poem.

We move directly into a read aloud of Lucille Clifton’s poem. A student volunteer reads it once, then a different student reads it again. I believe in reading every poem (especially when they’re this short) twice. The first time, we just get a feel for what it’s about; the second time we can possibly derive some thoughts on meaning and how that meaning is created. The more times we read it, the better. 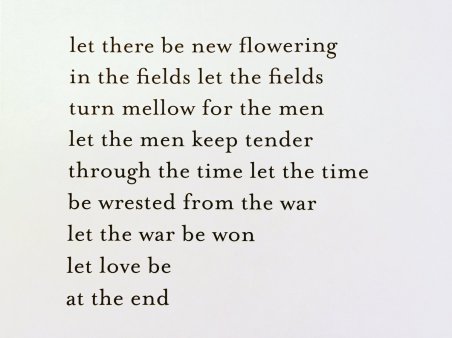 Discussion ensues on Clifton’s choices in enjambment and the effects it has on the poem, and how we as readers place emphasis on certain words. I also ask them to consider why they think she forgoes punctuation, which offered some impressive student insights.

To culminate the lesson, we read the explanation of the Golden Shovel form and we check out Terrance Hayes’s biography.

When teaching living poets, I think it’s important for students to see and know a little bit about who they are reading, which is why I always include poet bios. It helps to give them a sense of personal relevancy if they can “meet” who wrote it.

I give them the text of Hayes’s poem “The Golden Shovel” and I ask them to consider the line breaks as we listen to an audio of a Poetry Out Loud student reciting it. Some students will catch on fairly quickly, but for some it takes until they revisit the poem after listening to it. Once they realize the last word in each line of Hayes’s poem are the individual words Brooks uses in hers, they are like woooaaahhh that’s so cool. It was the best part of my day sitting back and watching their reactions as they made their discovery. Once the realization has been made, we get to talking about how the enjambment progresses throughout the poem, and how by the end of it, Hayes is breaking lines in the middle of words. This poem most certainly gave my students a new appreciation for the poetic line.

This lesson is followed up by a prompt, as it is a Creative Writing class. Students are asked to go back to a previous poem they’ve drafted and try to change its meaning simply by changing its line breaks. Can they create new emphasis on certain words? What happens to lines when they are longer versus shorter? Enjambed vs. end-stopped? And how can they use what they’ve learned to create a new poem from an old draft?

Check me out in the news! Class teaches poetry as an art form